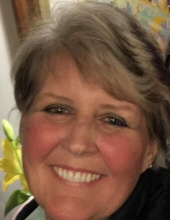 Beth Alice Kovatch Zorkan (59) passed away peacefully on December 13, 2020 after spending the day with her beloved daughters and sons-in law. Her battle with cancer began in 2019 and she fought hard until the end.

Beth was born on February 11, 1961 and beat her twin brother by 30 seconds, something she spoke of proudly. Their rivalry was a topic of humor at holidays and infamous game nights. As the only girl in the family, she learned to hold her own which made for interesting and humorous stories.

Beth was a 1979 graduate of Stevens Point Area Senior High. She moved to Phoenix where her two daughters, Megan Zorkan Herzberg and Paige Zorkan Christopher were born. She moved her family back to Wisconsin in 2001 so she could be closer to her parents, brothers and sisters-in-law.

Beth was a wonderful cook and the Kovatch family was lucky to have her help prepare Thanksgiving and Christmas dinners. She also liked to bring new dishes to game nights and cookouts. Beth was inspired by the Food Channel and had a plethora of cookbooks and recipes just waiting to be created.

Beth is survived by her daughters Megan Zorkan Herzberg and husband Tyler, Paige Zorkan Christopher and husband Nathan along with her granddogs Ella and Maggie. Siblings Scott Kovatch and wife Patti Kovatch, Jeff Kovatch and wife Sandy Kovatch, Mark Kovatch and wife Kelly Kovatch. She was very close to her ex-sister-in-law, Sherry Globensky and her husband Mark Globensky who reside in Phoenix. Beth also cherished time with her nieces and nephews, and great niece and nephew. She is survived by one aunt, Kathy Kovatch.

Beth was preceded in death by her parents, John and Barbara Kovatch, grandparents George and Alice Johnson, Walter and Edna Kovatch and two uncles, Rick and Tom Johnson.

At Beth’s request, there will not be a service.
To order memorial trees or send flowers to the family in memory of Beth Alice Zorkan, please visit our flower store.