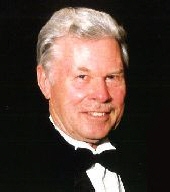 Donald G. "Bud" Besch, of Appleton went to be with his LORD peacefully, with his family at his side, on August 31, 2015. Donald was born September 24, 1925, to George and Leona Besch in Appleton, Wisconsin. Bud was raised in the depression era and quickly learned the value of hard work and helping others. Deeply engrained, Bud carried these traits with him the rest of his life, quietly blessing others. At the peak of World War II he joined the navy to help defend our country. He went through boot camp and later was stationed on the Destroyer USS Loy where he served from 1945 until 1946. After his military service Bud moved back to Wisconsin and worked at Fox River Knitting Mill where he soon met the love of his life, Charlotte Lund. They worked together for three years. They were married on November 6, 1948 in Appleton and recently celebrated their 66th wedding anniversary.

Both Bud and Chars life changed when they attended a Billy Graham crusade together. There they met the Lord of Lord, Jesus Christ and received him as their personal Savior. From then on both their lives took on a new richness which showed in all they did and effected countless others.

Bud was a humble man slow to speak and never wanting attention. He was known for his charitable heart and faithful giving, always thinking of others first. Bud constantly blessed all those around him, sharing all he had. He stubbornly refused anything in return and it would often turn into a friendly argument over who would pay for dinner.

Bud worked as an expert plasterer for the Gressler Brothers and later with Galinski Plastering. Due to Bud's steadfast work ethic he soon developed a reputation for being a solid craftsman and loyal employee. Bud enjoyed his career and loved those he worked for.

During this same time Bud and Char purchased the Restwell Motel in Fond Du Lac, where they lived and operated it for 20 years. During that time they continued to make life-long friendships with those who stayed with them. Then, after 17 years of marriage, and after nearly giving up hope for a child, they were blessed with their only child, Lisa L. Besch (O'Bre).

During weekdays, Bud, worked full time plastering in the Milwaukee area while Charlotte managed the Motel. Bud would return on weekends and then work full time maintaining the Motel and pouring himself into his family. During this time Bud was known for his tireless work ethic and commitment to providing for his family and blessing others. Later in 1981 Bud and Charlotte sold the Motel and moved to Appleton. Bud and Charlotte became avid walkers and developed strong friendships Mall walking at the Fox River Mall in Appleton.

Bud continued to share his faith with all those around him and was widely known for always wearing a ball cap the proudly said "Jesus is my boss". This single act of faith sparked many a positive conversation with others about the love of Jesus. Buds love for God showed in all he did. He wanted all the glory and praise to go to his wonderful Lord and Savior Jesus Christ. Bud led his family in committed service to God at The Tabernacle of Praise Church lead by his brother David Besch, and later attended the Assembly of God Church in New London.

Bud is survived by his wife: Charlotte Besch; his daughter: Lisa (Shaun) O'Bre; his grandson: Noah O'Bre; his sisters-in-law: Bernice Besch and Merlene Besch; and many wonderful nieces and nephews. Bud was preceded in death by his parents George and Leona Besch, brothers Don "Squeak", Robert, and David, and a sister Bertha Duncan.

Bud continued to be humble to the end, opting for a private funeral over a "fancy" funeral as he did not want the attention for himself, so the service and burial will be for immediate family only.