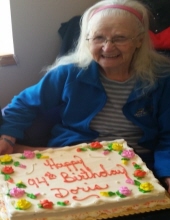 Doris Miller, age 94, passed away peacefully with family close by on Wednesday, May 8, 2019 at Country Terrace of Minocqua where she had lived since December 2015. She was born in Johnson City, TN, the daughter of the late Clarence H. Jory and
Nell J. (Gentry) Jory.

After her mother passed away when she was 8 years old, Doris was raised by her father and moved to Long Beach, CA. She graduated from Science Hill High School in 1942 and started working at the Long Beach Shipyard where they were working on government wartime contracts. Having high security clearance at the shipyard, she moved back to TN in 1943 to work in the then secret city of Oak Ridge, TN where the development of refining uranium for the first atomic bomb was happening. Everything was very compartmentalized, secretive, and no one in Oak Ridge really knew what they were actually working on. Security was paramount.

After the war, Doris continued to work in Oak Ridge for the newly formed Atomic Energy Commission. This is where she met Bob Miller when she fingerprinted him to clear him to visit his sister, Jessie Miller Guck, who worked there. Family legend has it that Bob’s finger prints were the only ones Doris EVER messed up and had to redo. Bob persuaded her to move north to WI where Bob and Doris were married on July 21, 1951. They set up house in Watertown, WI where she lived until moving to Minocqua, to be closer to her son in the northwoods of WI.

While living in Watertown, Doris worked for over 30 years as the school secretary for Schurz Elementary School where she touched the lives of countless students, faculty and staff. Doris and Bob were very active in the theater and dance community in Watertown. They were part of Curtain Club and the Watertown Dance Club, and members of the Watertown Country Club.

Doris is survived by her daughter, Donelle Bart, Seattle, WA, and her son, Charles Miller and his wife Ruth of St. Germain, WI. Doris was also considered a second mom to her best friend’s sons Peter Roug and his wife Jan, and Tony Roug and his wife Terri, and a big part of their kids (Jonathan, Kristopher, Elise and Karin) lives as they grew up and had families of their own. She was a part of the lives of 10 nephews and nieces.

Doris is preceded in death by her parents and husband Bob. Her ashes will be placed with Bob in the columbarium in the little chapel at St. Paul’s Episcopal Church in Watertown, Wisconsin.

A special thanks goes to Kristy Burke (director), and all Doris’ caregivers and friends at Country Terrace of Minocqua, a community based assisted living facility in Minocqua, WI. Their kindness and compassionate care made Doris’ final years comfortable, safe and happy.

Doris will be deeply missed.
To order memorial trees or send flowers to the family in memory of Doris Miller, please visit our flower store.