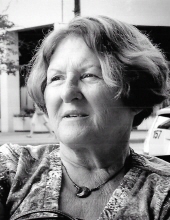 Judy was born on July 9, 1947 to Paul J. and Luella M. (Smith) Reinert in Oshkosh. Judy graduated from Omro High School in 1965 and went on to further her studies in nursing from Appleton and Madison schools.

Judy is survived by 1 sister Marion Yesse of Berlin, 5 brothers; Harold (Elaine) of Oshkosh, James (Julia) of Omro, Charles (Louise) of Stevens Point, Robert (Cec) of Berlin and William (Arlene) of Omro; sister-in-law Nell Reinert of Winneconne. 25 nieces and nephews and many special friends near and far.

Special thanks for Marge for her 4 plus years of friendship and care. Also special thanks to Dr. Steven Howard and Dr. Ian Robins of Carbone Cancer Center of Madison.

In lieu of flowers per Judy's wishes, donations can be made to the UW Foundation (brain cancer research), K4-B 100-600, 600 Highland Ave. Madison, WI 53792
If you wish, wear your Badger colors and "Mind the Step"
To order memorial trees or send flowers to the family in memory of Judith Ann Reinert, please visit our flower store.