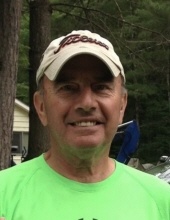 Robert Eugene Platt Jr., 74, of Oshkosh Wisconsin passed away on April 19, 2021 after a heroic battle with cancer.

Bob was born in Lafayette, Indiana to Robert and Iva (Miller) Platt. He graduated from Jefferson High School in 1965, that same year he married his high school sweetheart Jane. Shortly after, he joined the J.C. Penney Company, which took them to many new locations, where they met lifelong friends. Robert and Jane finally landed in Oshkosh, Wisconsin where he lived and worked until his retirement in 2007.

Bob also leaves behind some amazing golfing and motorcycle buddies who meant the world to him.

Bob's life will be celebrated privately by his family and friends at a future date, and fond memories will be shared by many in the coming days.
To order memorial trees or send flowers to the family in memory of Robert Eugene Platt, please visit our flower store.