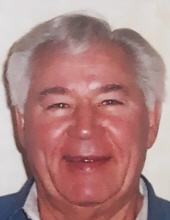 Roger James Haase, age 84, of Oshkosh passed away on April 15, 2021 at home with his family at his side. Roger was born to Marie and William Haase on November 17, 1936 in Oshkosh. He was later raised by his mother, Marie, and stepfather, Walter Kautz. Roger served in the U.S. Army from 1954 to 1957 and spent 16 months in Korea during his service. He married Sylvia Schettle on June 11, 1960 and celebrated 60 wonderful years of marriage in 2020. Roger retired in 2000 after working his last 17 years for the Oshkosh School District.
Roger and Sylvia became involved in the North Fond du Lac Archery Golf Club near Mt. Morris, WI, in 1965, along with their good friends Hilbert and Betty Kuen. They would later build their cabin across the road from the Club, in 1968, where a lifetime of good memories would take place. He would end up serving the Archery Club as its President for 24 years. Roger enjoyed hunting, trout fishing, skiing, being outdoors and specifically introducing people to archery. In the early year’s he enjoyed those endeavors with his younger brothers-in-law Dan, Don and Mark. After 1970, Roger had his son and best friend, Brian, to spend time with enjoying all of his favorite outdoor activities. Later in life, Roger enjoyed watching his daughter-in-law Barbara and granddaughter Amanda be successful at those favorite outdoor activities.
Roger is survived by his wife Sylvia, son Brian, daughter-in-law Barbara, grand-daughter Amanda; brothers Ron(Sallie) Kautz, John(Dreana) Kautz, sister Betty Eckstein; brother-in-laws Dave (Ellie Forseth) Schettle, Steve(Joan) Schettle, Dan Schettle, Don (Sue) Schettle, Mark(Debbie) Schettle, sister-in-law Mary Ann(Ken) Walter as well as many nieces and nephews.
Roger was preceded in death by his father William, mother Marie Kautz, step-father Walter Kautz; brother William, Jr; father-in-law Alois Schettle, mother-in-law Lillian Schettle; sisters-in-law Carol Schettle, and Marilyn Schettle.
A special thank you to the staff at Thedacare Hospice and brother-in-laws Mark Schettle and Don Schettle for helping to care for Roger. The family will be holding a celebration of life for Roger at a later date.
To order memorial trees or send flowers to the family in memory of Roger James Haase, please visit our flower store.