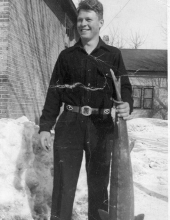 Roy was born on May 2, 1929, in Green Bay, Wisconsin, the son of late William August Buelow and Clara Gaedtke Voth Buelow. Roy grew up on the family farm in Harrison with three sisters: Harriet (half sister), Angela, and Virginia; three brothers: Ralph “Putt”, Rueben “Hunz” and Robert; and his two cousins: Donny and Jerome Buelow.

While working on the farm he helped his dad survey the lake road and hill, where he later built his home. Roy also worked at the High Cliff Gulf Course and Thilmany Papers in Kaukauna, before joining the service. Roy was inducted into the US Army, ERC Infantry, on 26 March 1951 in Milwaukee, Wisconsin.

Roy completed his basic training in Fort Leonard Wood, Missouri, and then traveled to Fort Lewis, Washington where he boarded the USNS Frederick Funston for Alaska. He was stationed at Eielson Air Force base and served his country as an Auto Mechanic repairing vehicles, weasels and heavy equipment. He also found time to do some hunting. PFC Buelow was honorably discharged and separated from the US Army at Camp Carson, Colorado on 3 Mar 1953.

Upon his return home he helped on the farm and was employed with the Menasha Corporation, attended Fox Valley Technical College for maintenance, and retired as a maintenance mechanic. “He could make anything run”.

Roy was united in marriage to Janice Burg on February 7, 1956 in the town of Stockbridge.
He will always be remembered, as someone who enjoyed the outdoors. Roy enjoyed being outside sturgeon fishing, chopping ice and hunting. He loved animals, fires, and time with children. He enjoyed traveling, and always preferred to go west. He liked casinos and the “shake of the day”. He belonged to the American Legion in Stockbridge and attended union meetings at the Labor Temple Bar.