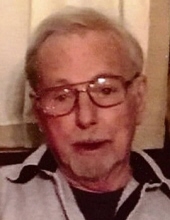 Thomas L. Geibel, 88, passed away at his home on April 4th. He was born on February 20, 1929, the son of Hugh F. and Martha L. (Steenbock) Geibel. He grew up in Menasha, and was a graduate of MHS in 1947, and served in the USMC. Tom returned to Menasha to be close to his relatives and raise his own family. He worked at Albany International for 29 years until his retirement in 1992. Tom loved his dogs, sports, fishing, and carpentry, and was always building something in his workshop for either one of his children or grandchildren. He was preceded in death by his brother Bud (Hugh) Geibel, his wife Patricia (Ales) Geibel, and his first wife and mother of his children, Sally Jo (Philippi) Kyle.

A celebration of life will be held at Stone Toad on April 29th beginning at 4:00 PM. In lieu of flowers a memorial fund is being established for one of Tom’s favorite charities.
To order memorial trees or send flowers to the family in memory of Thomas L. Geibel, please visit our flower store.