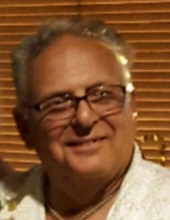 Truman Anthony “Tony” Montonati, 78, Appleton, lost his battle with congestive heart failure with his family by his side on Thursday, February 11, 2021. He was born on September 10, 1942, to the late Aldo and Esther (Sprenger) Montonati. His parents and siblings called him “Bucky”, while everyone else knew him as Tony. Tony enlisted in the U.S. Army in 1960 serving in a missile battalion for 27 months in Germany during the time the Berlin wall was being built. He earned 2 purple hearts for his service. Tony was a member of the Disabled American Veterans. Tony was united in marriage to Carol Kiser, the love of his life, in August of 1966.

Tony drove semi-truck for over 30 years traveling throughout the U.S. and Canada and on occasion, his wife and children were passengers. During 1973 to 1975 Tony served his community as an officer for the Seymour Police Dept.

Tony enjoyed hunting big game in Colorado as well as fishing for salmon and rainbow trout in Lake Michigan. Tony’s last trip was in October of 2020 to Colorado with his grandsons Cole and Devon. He was a lifetime member of the North American Hunting Club. Tony accepted his daughter Michele’s challenge in 2019, a passion of hers, and hopped on a jet ski a few times. Tony and his wife Carol created memories by purchasing Harley’s in 2007, and they took many trips with friends. Their biggest adventure was crossing the Mackinac Bridge in 2010.

Tony was a jack-of-all-trades with abilities in carpentry, welding and auto mechanics. In his younger years, Tony was involved in stock car racing. That passion was handed down to his son Tim from 1993-2006. Everyone in the pit called Tony “Pops”. Tony’s family jokingly started calling him “Old Geezer”. He willingly gave a helping hand to anyone he crossed paths with and deep down he had a heart of gold.

There will be a private memorial gathering at Highland Memorial Chapel in March, along with a Military Honors.

A special thank you to the Theda Care at Home team for their support through this difficult journey.

Tony will be loved always and never forgotten.

2 Timothy 4:6-8
The time for my departure is near. I have fought the good fight, I have finished the race, I have kept the faith. Now there is in store for me the crown of righteousness, which the Lord, the righteous Judge, will award to me on that day—and not only to me, but also to all who have longed for his appearing.
To order memorial trees or send flowers to the family in memory of Truman "Tony" A. Montonati, please visit our flower store.