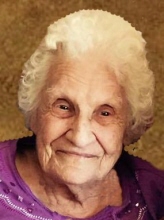 Viola Raeder. age 86, passed away peacefully at Appleton Medical Center on Saturday October 17, 2015, with her family by her side.

She was born October 30, 1928 in Shawano, Wisconsin to the late Dewey and Effie (Lake) Norton. Viola was a resident of Shawano until 1982; she moved to Henderson Nevada and returned to Neenah, Wisconsin in 2008. She was very strong in her faith and her greatest joy was spending time with all her beloved grandchildren and great-grandchildren.

A celebration of Viola's life will be held beginning at 10:00 AM on Tuesday October 27, 2015, at St. Mark's Lutheran Church, 140 S Green Bay Road, Neenah, Wisconsin, with service to follow. Reverend James A Wilson will officiate.

"Big Grandma", you will be forever in our hearts and the memories we have of you will be cherished… Love, all your grandchildren. Kiss "Little Grandma for us"