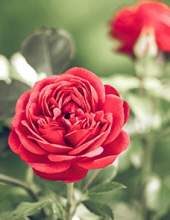 Aida was born on July 7, 1939, in Romeno, Italy, daughter of the late Ciro Guido and Elda Guiseppina Luigia (Graiff) Gabborin. She graduated college in Treviso, Italy, in 1957. Shortly thereafter, she began working as an interpreter and clerk at the United States Army Hospital in Vicenza, Italy, where she met her husband, Robert (Bob) Porter. They were married on April 29, 1961, and had their first two children in Italy. In 1964, they moved to Rockford, Illinois. She became a U.S. citizen in 1976.

From 1964 until 2004, Aida was a dairy farmer with her husband in Illinois and Wisconsin. She and Bob enjoyed retirement in Florida and northern Wisconsin, which included lots of fishing, before Bob passed away in 2009. Since then, she liked to travel to Italy and take Caribbean cruises. She loved a good cup of coffee in the morning, and pizza and ice cream the rest of the day. She was a voracious reader, loved classical music, could knit the most beautiful sweaters and winter garments, and feed a family on what looked like empty cupboards. She was selfless, strong and humble. She passed onto so many others European values and the immigrant drive to success. For the life she lived, she influenced many, persuaded a lot, yet took credit for little.

Heart of the Valley is assisting the family with final arrangements; a private family burial will take place at a later date. Per Aida's wishes, no visitation or funeral.

We would like to extend a thank you to Dr. Ifueko Okundaye of Premiere Health, Neenah; Heartland Hospice; and Dr. Siarhei Vysotski and the Emergency Room staff at Theda Clark.