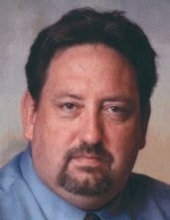 With deep sadness, we announce the passing of Alan Peche at his home in Appleton on June 12 after a four-month battle with pancreatic cancer. He was a devoted father, husband and friend. Alan was born on December 30, 1964 in Wausau, WI to Leonard & Rosella (Holbach) Peche, both deceased.
He grew up in Medford and attended UW-Eau Claire where he graduated Summa Cum Laude in Math & Physics Education. He credited professors at Eau Claire with fostering his love of science and astronomy and making him the teacher he was.
He moved to Baton Rouge where he met his wife, Janet Barklage while working as the Planetarium Educator for the Louisiana Arts & Science Center. They married on April 30, 1993 and relocated to Tampa, FL where he was the Planetarium Director at the Museum of Science & Industry (MOSI) and a physics teacher. He moved to Appleton in 2008 as the Director for the Barlow Planetarium. Throughout his career he shared his love of science, astronomy and space exploration with all ages as well as designing/renovating several planetariums.
He is survived by his wife and two daughters, Olivia and Amelia. He was the proudest father and always said they were the best thing he ever did and the two bravest people he’d ever known. He is also survived by his beloved cat, Watson who remained loyally by his side and his wife’s cat, Kai, who continued to ignore him.
He is further survived by his siblings Leroy (Wendy) Peche of Mequon, Beverly (John) Schmidt of Wausau and David (Ann) Peche of Menomonee Falls. Also surviving are his nieces & nephews Lauren, Kyle, Joshua, Rebecca, Jessica, Dustin, Benjamin, Kalin, one great-nephew, Oliver and one great-niece, Amelia.
Alan expressed his deep appreciation to the friends and family who reconnected with him over the last weeks of his life to reminisce and allow him to share how much you meant to him.
“You-You alone will have stars as no one else has them... In one of the stars I shall be living. In one of them I shall be laughing. And so it will be as if all the stars will be laughing when you look at the sky at night. You, only you, will have stars that can laugh! And when your sorrow is comforted (time soothes all sorrows) you will be content that you have known me... You will always be my friend. You will want to laugh with me. And you will sometimes open your window, so, for that pleasure....” from The Little Prince, Antoine de Saint-Exupery
According to Alan’s wishes; a celebration of his life will be held at the UWO at Fox Cities
Communication Arts Center, Thrivent Lobby, 1478 Midway Road, Menasha, WI
campus in Menasha on July 30, 2021 from 4pm to 6pm. A second celebration of life will be held at MOSI in Tampa, Florida on August 12, 2021. He wanted these to be casual parties to share happy memories with family and friends and his request was for us to carry on without him, he will be there in spirit.
To order memorial trees or send flowers to the family in memory of Alan J. Peche, please visit our flower store.