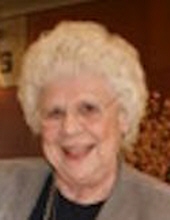 In the early hours of Tuesday, August 25, 2020, my grandma opened her eyes and took her last breaths as I held her hand and the soft music we were listening to stopped at the same moment. It was so peaceful and we were blessed to be with her during her last few days on earth. She was 93 years old, and decided to spend this year’s birthday up in heaven with Jesus and so many people that have gone before her. She has wanted this peace for some time.
Annmarie was born in Chicago, IL on August 29, 1926 to her parents, her beloved father, Clemens J. “Clarence” Bachmann and her mother, Anna Maria Vosters Bachmann, whom she is named after. When her mind was clear, she could tell me her address and about living near the streetcars and train tracks in Chicago. She mentioned how she would pick potatoes with her grandmother, Hanna Vosters, in Little Chute. She was strong and independent at times, but always “daddy’s little girl.” Growing up she was a bit of a Tomboy and liked wearing trousers and playing sports with the boys. Her eyes would light up as she would tell us about her past. While she reminisced, she was missing loved ones that would be able to remember and share in the stories.
Annmarie went to Appleton West and later to Nicolet College to learn computer programming. She wanted to join the army during WWII, but wasn’t able. She even modeled wedding dresses. Annmarie was very good with numbers, which probably came from her grandpa Clement Otto Bachmann. We learned that she was a machine operator for Riverside Paper Corp; did stenographic work for a lawyer; cashiering & bookkeeping for the A. & P. Food Stores; an auditor for True Corporation of America, Gallenkamps, and The Northernaire; and working at shoe stores.
Annmarie married Kenneth Mac Gresens on October 25, 1948 in Milwaukee. They lived in the Appleton area for most of their lives and Three Lakes from 1973 to 1986. They loved spending time together and enjoyed bowling, baseball games, and the movies. They would go out dancing together, which was one of her favorite things. The other favorite pastime was floating on their boat fishing. She raved about “what a beautiful baby and boy” their son, Robert Walter, was and how “Kenneth would spoil that boy” along with the grandparents. She was an excellent caretaker of the people in her life that needed it when they could no longer help themselves. This proves to be true up until the end when we heard that she was very concerned about other residents at her apartment and assisted living facilities. She came to their aid at times, even when she would tell us how she never left her room. Annmarie kept an immaculate house and was very particular that every Wednesday was the day to have her hair styled. She was an excellent cook and I especially loved her fudge and sauerbraten. Thanksgiving dinner was a favorite by all, including her precious dogs. She raised a litter of poodles, and had cocker spaniels, a silky and a yorkie poo. Annmarie was an incredible seamstress and reupholstered furniture.
She was a very spunky lady and said what was on her mind. I am just glad that we were able to have some time to get to know each other more after I had my own children. She wanted to stay independent, but unfortunately, we had to make some difficult decisions to give her assistance. She did have certain routines and wanted her egg sandwiches and milk during the last months of her life.
We are so grateful that she lived her last days the way she’s always lived her life. In her own way and timing. We were able to be with her during a short window between lockdowns because of Covid. We are very thankful to Frontida, Bluestone, and Generations Hospice for their help much patience, and care during Annmarie’s time with them. She was so fond of Dr. Jonathan E. Hagen and we thank him and his staff for the many years that they took such good care of Annmarie.
She is preceded in death by her parents; an infant sibling; her brother, Robert Clemens Bachmann; her sister, Grace “Honey” Wells; her husband and in-laws. She will be missed by her son, Robert (Marie) Gresens, Waupaca, WI; grandchildren, Kerry (Dennis) Bielke, Green Bay, WI and James (Lisa) Gresens, Kimberly, WI; a nephew, Tony (Laurie) Wagner, Waupaca, WI; step-grandchildren, Daniel (Amanda) Bielke, Kristina Rose (Bielke) & Bailey Ramsdell; great grandchildren, Jacob (Kayla) Cappelle; Marissa (Zak) Gresens, Riley Gresens, Jonathan and Brielle Bielke; great-great granddaughters, Lily, Ava, Zelda, and another one on the way in November; her former daughter-in-law, Linda Arter; and a dear friend, Joyce Wahlfeld.
Annmarie had a special message: “I’m very lucky and had the best children and best grandchildren that had the most beautiful children and I love you very much:” stated on October 23, 2018.
Private interment services were held at Highland Memorial Park for Annmarie and Kenneth. We want to thank Pastor Leon Knitt for helping bless Annmarie and comfort the family during this time. Annmarie requested that any memorial be given to the Fox Valley Symphony please.
To order memorial trees or send flowers to the family in memory of Annmarie Rose Gresens, please visit our flower store.