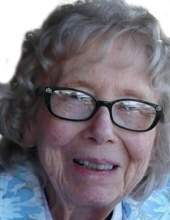 Audrey Langvad Danielson, age 90, passed away peacefully on Sunday, September 10, 2017 at Park View Health Center in Oshkosh. Audrey was born in Superior, Wisconsin on March 11, 1927, the daughter of Andrew Langvad and Nora Johnson Langvad. As an only child, Audrey was delighted to be surrounded by her numerous Johnson cousins, many of whom she stayed close to her entire life.

Audrey was a proud graduate of Superior Central High School in 1945. On August 28, 1947, Audrey married Norman Danielson and they eventually had five children. In 1952, they moved from Superior to Menasha. In addition to raising her children, Audrey worked part-time as a waitress at Kimberly Clark Guest House and as an accomplished seamstress at The Parrot Cage and Heritage Lamb and Wool Company.

In 1974, Norman and Audrey moved to Mount Morris where Audrey assisted Norman in the design and construction of two homes. Norman and Audrey were known for creating a fun atmosphere for all, and this was anchored by Audrey's hospitality and warm, loving nature. Audrey was a faithful member of Hope Lutheran Church in Wautoma and loved to create items for their Norwegian Fair. She also loved to travel and enjoyed trips to Norway, Mexico and all over the U.S. to visit her children and grandchildren.

In 1989, Norman and Audrey purchased a home in Wautoma. After Norman passed away in 1998, Audrey continued to live there until her move to Hearthside Commons in Neenah in 2010. In January of this year, the family decided to move Audrey to Park View Health Center in Oshkosh. At Park View, Audrey made many friends and was loved by the staff.

She was preceded in death by Norman to whom she was married for over 50 years, her infant daughter Audrey Susan, and daughter Lenora Danielson.

The family would like to thank all who touched Audrey's life, especially the staff at Park View Health Center for the care and compassion they provided in her final months. Audrey was one-of-a-kind, with a sharp wit and keen sense of humor. She lived a life filled with the love of family and friends and will be missed.

Per Audrey's wishes, she will be cremated and a memorial service and burial will be held at King in October.
To order memorial trees or send flowers to the family in memory of Audrey Mae Danielson, please visit our flower store.