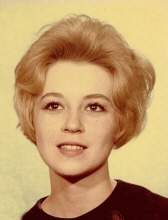 Barbara E. Fink, age 79, of Neenah, passed away on Friday, December 2, 2016, at Manor Care in Appleton. Barbara was born on July 28, 1937, in Neenah, to the late Martin and Carmen (Grady) Christopher. She married Thomas Fink on July 4, 1959, in Frankfurt, Germany. Barbara was a loving wife, mother, and grandmother. She was a former president of the Winnebago County Lawyers' Wife Club and a member of the Shamrock Club of the Fox Valley.

The funeral liturgy for Barbara will be held at 11:00 AM on Friday, December 16, 2016, at St. Patrick's Catholic Church, 324 Nicolet Blvd. Menasha, WI. With Father Jim Hablewitz, and Pastoral Leader Mary Krueger officiating. A time of visitation will be held on Friday starting at 9:30 AM and continuing until the time of the service.