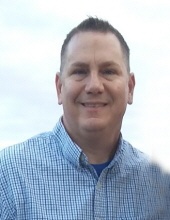 Bradley Raymond Gegare passed away in Appleton, WI on January 25, at the age of 49 after a courageous fight with melanoma. Brad was born to Raymond and Betty Gegare on December 25, 1970, in Green Bay, WI and shares his birthday with the Lord. He grew up on the west side of Green Bay and attended Green Bay West High, graduating in 1989. He attended UW-Oshkosh where he met and married Kris Mantei. Brad graduated with a degree in Radio-TV-Film. He used that degree in the field of marketing and media services until his early retirement from Spectrum in the Fall of 2019 due to his health and impending battle.

Brad is survived by his wife, Erin Culligan. Brad and Erin were married in Ireland on July 10, 2019, on a trip that will always be remembered by those in attendance.

He is further survived by his two children, Conner (UW-Milwaukee) and Kiley Gegare (UW-LaCrosse); his father, Ray Gegare, Jr. of Green Bay; sister and brother-in-law, Brenda and DJ Schneider of Sherwood, Wisconsin; his niece Jordan and nephews Bryce, Tyson, and Jake. He is also survived by many loving aunts, uncles and cousins and many amazing friends.

He was preceded in death by his mother, Elizabeth (Betty) Gegare and his loyal companion Oobie, the "all American love hound."

Brad's most cherished accomplishments include coaching his children in Pop Warner football and KGBA basketball, annual bell ringing for the Salvation Army, volunteering for the Old Glory Honor Flight and Christ the King Church/Sherwood and Feed My Starving Children.

There will be a celebration service in Brad's honor at Christ the King Lutheran Church in Sherwood on Saturday, February 1 at noon. In lieu of flowers, a fund has been set up to defer the cost of the medical expenses incurred during Brad's battle. Cremation services are being handled by Heart of the Valley Cremation Services in Kimberly, WI. The family would like to thank the hospice team from Ascension for the loving care provided, including Nicole, Tracy, and Ann. Friends and relatives are invited to join the family at Waverly Beach after the service to share memories and stories that will make you laugh, cry, and remember Brad and the good ol' days.

I am lucky and grateful that our paths crossed. I love you, Erin

Memorials may be directed to the family and mailed to: