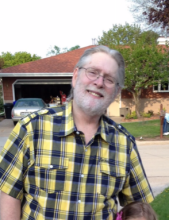 Byron passed away peacefully at St. Elizabeth hospital on December 7, 2019 at age 65.
He was preceded in death by his father David Gray, his mother Marcella (Byers) Gray, brother Todd Gray and sister Geri Gray.

Byron was born in Jacksonville Florida on January 4, 1954. As the son of a Navy sailor he spent his childhood in various locations. He went to high school in Wisconsin Dells and remained in the Midwest. For 40 years he worked as a highly respected artist and sign maker. He will be sorely missed.

The memorial service will be private.

The family would like to thank the doctors, nurses and staff of Ascension Hospice, St. Elizabeth Hospital, and Byron’s cousin and best friend for 55 years, David Dushek of Mt. Horeb WI.
To order memorial trees or send flowers to the family in memory of Byron Gray, please visit our flower store.