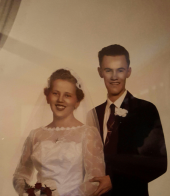 Carlton N. Gossen, age 85, of Appleton, passed away on Sunday, November 01, 2015. He was born on October 30, 1930 in De Pere to the late Herman and Christine (Smits) Gossen. Carlton married the love of his life, Dorothy Tordoer on October 25, 1956. Together they were blessed with four children; Linda, Russ, Jim and Penny.
After nearly thirty years of employment with the Appleton Post Office Carlton retired, he enjoyed his retirement by relaxing. He was an avid Green Bay Packers fan and would never miss a game. His fondest memories where the times spent camping with his family and spending time with his grandchildren.

Private family services are being held.