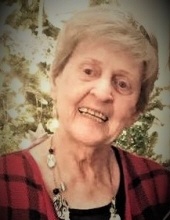 “This Little Light of Mine”.....
“My soul is racing ahead of me. It says, the body is too slow for me - I am going.”
On November 15, 2019, surrounded by family members, Carol Mae Glodowski, age 87, opened her heart, and extended her hand as she was guided into the Light and surrounded by Love, after a courageous struggle with congestive heart failure.

Carol lived joyfully not because her circumstances were joyful, but because she herself was joyful. Born on March 7, 1932 in Mosinee, Carol was the daughter of Frank and Genevieve (Rowe) Retzner. On June 14, 1952 Carol married her high school sweetheart, Richard Rutkowski, spending their early years in Stevens Point raising their six children together until Richard’s untimely death in 1966.

Whenever Carol was asked what her greatest accomplishment in life was she’d reply, “Being a Mother.” Her role as mother and grand-mother and great grand-mother was her inspiration and passion for life. She shared her unconditional love for her family and every Soul she met. Her radiant smile captured the hearts of many.

She was proud to be an American and was easily moved to tears when celebrating the “Red, White and Blue”; she displayed the American flag with great pride.

Carol married her second husband, Jim Glodowski, in 1969 relocating to Menasha. This new chapter in her life is where her hidden talents and creativity were newly discovered. After her children were grown she and Jim relocated to Minocqua where they soon opened a motel (The Chalet) and gift shop (Little Bit Country); bringing in customers from all around the state. After many successful years of running their business in Minocqua, Carol and Jim returned to the Fox Valley area to enjoy their retirement years together.

A memorial service will be held on Saturday, November 23 for immediate family members only.

“Tonight, tomorrow and always, we’ll sleep with you in our Hearts.”
To order memorial trees or send flowers to the family in memory of Carol Mae Glodowski, please visit our flower store.