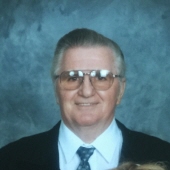 Chuck Grissman, 77, Appleton, died Friday, June 12, 2015, after a courageous battle with congestive heart failure. He was born, July 21, 1937, in Kaukauna to Henry and Gladys Grossman.

On August 31, 1969 Chuck married the love of his life, Dottie Conradt at Trinity Lutheran Church in Appleton. She was his world. Chuck loved spending time with his wife and friends down at Neighbors Bar, Tiger's and The Well. He enjoyed playing the gambling machines, going on pigeon runs and playing cribbage with his grandkids.

Chuck was a sergeant in the United States Army for 13 years, along with being a paratrooper. After the military he then started driving trucks across the country for Neenah Foundry and CTS Trucking company. He also worked many years at Maple Leaf Landscaping for his good friend Cal Stapel. Even after years of retirement Cal and his wife Jan remained very close friends. Along with very close friend Mark Zima.
Chuck is survived by his wife Dottie and their eleven children. Lynn Engstrom (Clint), Jeannie Tushar(Tony), Julie Conradt(Scotty), Bonnie Lueck(Steve), John Conradt(Norma), Rocky Conradt(Kathy), Karen Kokjohn(Tom), Vicky Harder(Pat), Valerie Oscavich(Terry), Kevin Grissman and Theron Grissman. Along with their amazing thirty seven grandkids and great grand kids. Chuck is also survived by his sisters Deloris J. Jacobs (Arthur), Vione "Pat" Adams(Paul) and brother Leo Grissman(Linda) and numerous loved nieces and nephews.

Chuck was preceded in death by both his parents, Henry and Gladys Grissman, his sisters Geraldine Grissman and Rita Debrall(Jim). His brother Lee Grissman, along with his grandson Justin Conradt.

As per Chuck's wishes there will not be a funeral or showing. All he asked was for us to remember him as he was. Either making a joke, telling a story or singing one of his many songs that he made up as he went along.

We want to say a special "thank you", to Thedacare Home Care, Dr. Steven Hagen and his nurse Ann. Along with all the numerous doctors and nurses that have helped us along his journey.

You will forever and always be in our hearts!