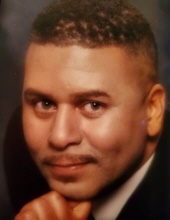 Clinton Ray Courtney, 56, of Appleton, Wisconsin, passed away unexpectedly on Sunday, April 19, 2020, with his wife and daughter by his side. Clinton was born in Junction City, Kansas, on June 18, 1963 to Charles and Arlene Patterson-Courtney. After graduating from Junction City High School, he entered the United States Air Force and was stationed at Lowry Airforce Base in Denver, Colorado. He was an aircraft maintenance mechanic specializing in jet engine repair.

Clinton attended college at the University of Arizona and then, Kennedy-King College in Chicago. Clinton then met his wife, Stacy, when he moved to Wisconsin. It was love at first sight and it was often felt that they were twin flames because of their enduring love for each other. They have been inseparable ever since.

He worked for many years at Alcan Manufacturing where he was a pressman. During this time, his daughter, Lydia was born and there was an immediate bond that could not be faltered nor broken. He fondly called her "poopie head" and Stacy "little penguin." Clinton had a passion for many sports including golf and had many golf partners from Stroebe Island and the surrounding area.

and Cheryl St. Louis, all of San Antonio, TX, and a brother Charles Courtney of Mannheim, Germany. He is also survived by a brother-in-law Stephen Roberts and many aunts, uncles and numerous nieces, nephews and cousins living in Junction City, Kansas, Denver, Colorado, Texas, Germany and Chicago area.

A full military honor service will be held later this summer in San Antonio, Texas at Fort Sam Houston Cemetery.

Our Dearest Clinton, we are no longer the '3 Rays'. We are missing the one Ray that kept us sturdy and strong like a rock. That was always you. I know you were looking forward to our new Ray, A'layjah. You were so excited to get her nursery together. You did it all. Your smile beamed over 1,000 miles whenever she was spoken about. Please watch over us in this new beginning. You were supposed to be a part of this, and you still will be, we will share your incredible legacy you left behind and you will be missed beyond belief... We love you always and forever, Clinton. Coco will forever wait for you on the steps...
To order memorial trees or send flowers to the family in memory of Clinton R. Courtney, please visit our flower store.