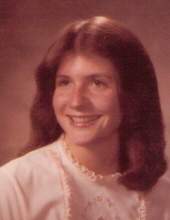 Colleen McMahon Albani passed away October 8, 2017 at her home in Little Chute, Wisconsin. She was fifty-six years old, born in Neenah, Wisconsin to Rita and Robert McMahon on August 18, 1961. She graduated from St. Mary’s high school in Menasha, WI in 1979 and graduated from University of Wisconsin La Crosse with a degree in English literature.

The greatest joy of her life was her son, Aaron Albani. Together they would play music in the living room and laugh watching the dogs play. Her love of music filled any room she was in and she passed her knowledge along to dozens that she taught in her home. Piano, french horn, and childhood music were her passions.

Colleen’s faith became very important to her in late 2015, when she had the opportunity to attend the Walter Hoving Home in Pasadena, California. She came into a close relationship with her Lord and Savior Jesus Christ whose forgiving grace guided her at a time in her life when she needed hope and victory.

She would often be found sitting cross-legged on the floor alongside great nieces and nephews playing in lands of make believe and laughter. Her love of children was palpable and she had an ability to engage with a group, regardless of age, with an ease that fed her. Colleen’s knack for wit and repartee lightened and brought joy to entire rooms and faces anywhere she went. She is greatly missed by all who love her.

There will be a funeral service at Christ the Rock Church in Menasha, Wisconsin (W6254 U.S. 10 114, Menasha, WI 54952) on Saturday, October 21. Visitation is 9:00-11:00 with service and lunch to follow. In lieu of flowers, memorial gifts may be made to the Walter Hoving Home in California. To make donations, please follow this link: http://walterhovinghome.org/donate-now/ and select “California.” Alternatively, you may mail gifts to Walter Hoving Home 127 South El Molino Avenue, Pasadena California, 91101.
To order memorial trees or send flowers to the family in memory of Colleen McMahon Albani, please visit our flower store.