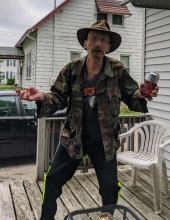 Dale R. Beyer went to his heavenly home on Saturday March 27 at the age of 68. He was able to pass peacefully in the comfort of his own home after a short battle with cancer. Dale was born on January 16, 1953 in New London to Lawrence Beyer and Dorothy (Sawall) Finger.

Dale loved to have a good time whether he was listening to a band, cheering on his favorite team or sitting on his porch having a few cold beers. He liked joking around with people and never took life too seriously. Dale was a man who stayed true to who he was and accepted people for who they were. Dale found the greatest value in spending time with family and friends and making sure they had just as much fun as he.

Dale was preceded in death by both his mother and father, brother Gary and sisters Sharon and Yvonne; nephews Christopher Beyer, Clinton Beyer and Bradley Schertz and niece Kimberly Wegner.

At Dale's request there will be a Celebration of Life at Roundabout in Kaukauna for close family and friends. The time and date of the celebration are yet to be determined.

Special Thanks to all the wonderful Hospice staff!
To order memorial trees or send flowers to the family in memory of Dale R Beyer, please visit our flower store.