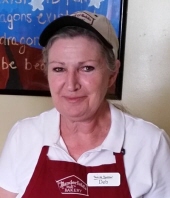 Deborah L. Wilcox, 58, of Appleton, passed away on December 31, 2015. She was born on July 19, 1957, in Two Rivers to Sydney and Janet (Havlinek) Herman. She married Jeffrey Wilcox on October 4, 1991 and the two were married until his passing on July 7, 2010. Deb loved spending time baking and cooking meals, gardening, and family gatherings at her farm, as well as her job at Manderfield's Bakery. She also enjoyed spending time at her parent's lake house watching the kids swim. She will be dearly missed by her family, but they will all continue to spend time sharing memories of her.

Deb is survived by her five children: Matthew Benavides, Rebecca (Barney) Lemanski, Rachel (Kurt) Stanich, Riley Wilcox and Caleb Wilcox; grandchildren: Oliver Stanich and Destiny Lemanski; parents: Sydney and Janet Herman; siblings: Kim (Ron) Rosa and Barb (Gary) Schueller; goddaughter's: Nicole (Rosa) Pappas, and Ashley (Schueller) Kasten. Deb is further survived by many nieces, nephews, other relatives and friends. She will also be missed by her three dogs and too many cats to count. She was preceded in death by her husband, Jeffrey Wilcox and her infant grandchild, Jasper Stanich.

A Memorial Service for Deb will be held at 11:00 a.m. on Tuesday, January 12, 2016, at the RIVERSIDE CEMETERY CHAPEL, Appleton, followed by the interment of both Deb and Jeffrey. In lieu of flowers, a memorial has been established in her name, any donations maybe written out in Deb Wilcox's name. Online condolences maybe offered at www.hovcremation.com