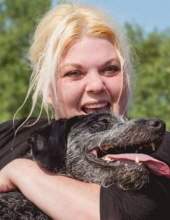 Delbra Dawn Edgar, LPN and care giver, died unexpectedly on September 16, 2017, at the age of 41 in her home in Green Bay, Wisconsin.

Delbra is survived (immediate family) by her parents James Edgar Sr. and Doreen Edgar; her sisters, Rebecca Bass and Holly Shaver; her niece, Jasmine Shaver and nephew Jared Shaver; and her beloved dog, Aronson aka Diggy.

Delbra was born in Hibbing, Minnesota on November 22, 1975, grew up in Bark River, Michigan and graduated Bark River Harris High School in 1993. She started her nursing career at Pinecrest Medical Care facility at the age of 18. Delbra went on to graduate from Itasca Community College in 2014 with a nursing degree and became an LPN. She enjoyed working with the elderly and took great pride in her challenging and rewarding career.

Delbra was elected as Associate in 2004 to the R.C. Hathaway chapter Order of the Eastern Star #49 in Escanaba, Michigan. Even with her demanding career, over the years Delbra made it a priority to stay actively involved in many of the charities and fundraisers of Eastern Star.

Her sense of humor lifted any and everyone’s spirit. Her generosity has changed many lives. Anyone who has had the privilege of knowing her knows that she is one of a kind. She is loved by many and will never be forgotten.

There are no plans for a memorial service at this time.
To order memorial trees or send flowers to the family in memory of Delbra D. Edgar, please visit our flower store.