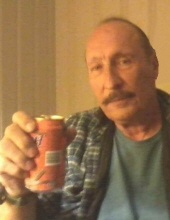 Dennis "Doc" Armstrong, 70, passed away on Sunday, July 19,2020, after a long battle with cancer, surrounded by his loved ones, at the home of his son Graham Armstrong. He was born on September 12,1949 to the late Viola Foster (Martin) and Ray Armstrong in Fond Du Lac, Wisconsin.

Dennis married Maybell Strobel in Fond du lac Wisconsin. He was a painter most of his life, having painted many homes around the Fond du lac area. He was also an owner of a pet store in Fond du lac.
.
Dennis was adopted by the Ojibwe Tribe and practiced the ways up until the day he passed. He often attended sweat lodges and Pow wows. He was taught the ways by Tom Sheehee. Dennis was an Ojibwe Elder, pipe holder, and was teaching his son Graham the Ojibwe culture.

He was preceded in death by a grandson Nicholas Armstrong.

Dennis’ Family would like to thank Thedacare at Home Hospice Nurse Kristin Hanson for all the love and support she gave us during Dennis’ last few weeks.

To honor Dennis’ wishes he will be cremated at the Heart of the Valley Cremation Service in Kimberly. Bob and Judy Kohel (Eagles Nest Center) will be showing Dennis’ son the way to send him off on his journey. There will be a memorial at a later date.

Condolences may be sent to 410 E. Fulton Street, #9, Waupaca, WI 54981
To order memorial trees or send flowers to the family in memory of Dennis "Doc" Armstrong, please visit our flower store.