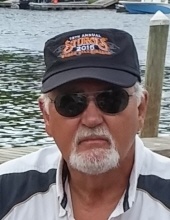 Dennis Roland Velie, 67, passed away on Thursday, October 19, 2017 at ThedaCare Medical Center, Appleton with his loving wife at his side.

Dennis was born August 9, 1950 to Irving and Lorraine (Funk) Velie in Fond du Lac, WI. He graduated from Goodrich High School in Fond du Lac, WI.  Dennis was united in marriage to Jeanne Mortinger on September 19, 1970, at Sacred Heart Catholic Church in Fond du Lac.  He was a veteran having served in the US Army from 1970 until 1973 in Germany.  He worked at Mercury Marine from 1973 until 2009.  In 2009, he and his wife moved to The Villages, Florida. He was a member of St. Mark the Evangelist Catholic Church in The Villages, FL.

Dennis was a kind and friendly person to all that knew him.  He enjoyed hunting, riding his Harley and spending time with his family.  He will be sadly missed by his buddy (Nugget) and their daily Golf Cart rides in Florida.

The family would like to give a special Thank you to ThedaCare 5th Floor staff and Hospice for all of their compassionate care for Dennis.

Per Dennis’s wishes he has been cremated and A celebration of life will be held at a future date.

“Dennis you fought the hard fight and your pain is now gone, see you in Heaven Honey!”
To order memorial trees or send flowers to the family in memory of Dennis R. Velie, please visit our flower store.