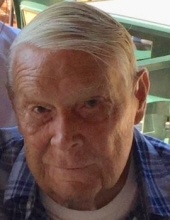 Donald (“Don”) Paul, passed on to his heavenly home on June 8, five days after celebrating his 90th birthday with his family.

Don was born June 3, 1928 in Norway Michigan, to Charles and Anna (LaVoie) Paul. Don joined the army at age eighteen, and had many stories of travelling cross-country from the U.P. to the various bases where he was stationed. Don had a passion for flying, and obtained his pilot’s license in 1947. In 1948, he married his lifetime sweetheart, Louise Krause in Niagara Wisconsin. Don and Louise later moved to Neenah where they raised their family. Don worked for Banta Corporation for twenty years, and he and Louise owned and operated several businesses in the area, including Parkway Motel, Little Chute Drive Inn and Paul’s Trucking.

Don enjoyed flying his seaplanes to his cabin in northern Wisconsin and to Canada for moose hunting. He was an avid fisherman, and he and Louise spent countless hours fishing in the Gulf of Mexico during their winter getaways. Don was very devoted to his family and had strong faith in the Catholic Church.

A funeral and celebration of his life will be held at St.Gabriel Catholic Church in Neenah. In lieu of flowers, a memorial has been established at Ascension at Home Hospice. Don’s family would like to extend special thanks to the caring staff at Ascension for their compassion and care provided to Don.
To order memorial trees or send flowers to the family in memory of Donald George Paul, please visit our flower store.