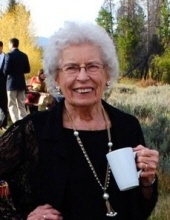 Dorothy R. Laux, our beloved little “Wren”, stretched her wings and flew up to heaven on Saturday, March 3rd, 2018. She was born on April 14, 1927 in Clintonville, WI to the late Clarence and Lydia Kriewaldt. She married Kenneth P. Laux on Sept 1, 1947. These two were really some great parents and had lots of fun with the children and grandchildren on good old Long Lake. Many memorable meals were shared as “Dor” or “Little G” as the grandkids called her, was a most excellent cook. She also enjoyed a late night swim on a hot summer night and planting many trees and flowers. She was very kindhearted and would do anything for her family. She will be missed greatly. Dorothy was a member of St. Martin Lutheran Church in Clintonville, WI.
In addition to her parents, she was preceded in death by her husband, Kenny and her brother Reinholdt Kriewaldt.
Dorothy is survived by her daughter RaChelle (Jeff) Scherer, and son Scott (Barbie) Laux. She is also survived by five grandchildren: Andrea, Nicolette, Perianne, Cullen, Kelby and two great grandchildren: Parker and Lucie.
A private family gathering will take place this summer as she would have wished.
To order memorial trees or send flowers to the family in memory of Dorothy Laux, please visit our flower store.