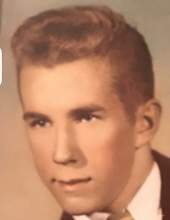 Doug accomplished many things during his life, things of which he was very proud. He was track captain during high school, where to this day, he holds the record for the 400yd dash. He proudly served his country as an Army Sergeant of the “Old Ironsides”, the Heavy Weapons Infantry Unit. He received many honors, one of which was his accreditation as Expert for Rifle. Two of his active duty years were spent in Germany, where the heritage of our family was derived. He pursued his love for flying and received his Small Engine Pilot’s License. Doug was an exceptional shot with any gun and could compete against the best. He was often a perfectionist and made certain any job he did was done so with the highest of standards, especially during his 40+ years as a carpet installer. His biggest accomplishments, however; were his five daughters; and the love of his life, Barb.

Doug treasured the time spent with his children. Times he took his daughters flying, laughing because his daughter Amy would always fall asleep. He loved to tell of his past experiences and beamed with joy when others complimented him on all that he had achieved. He was an avid hunter, and would often bring along his beloved golden retriever, Babe. He played the guitar and banjo and was a jitterbug master on the dance floor. He liked to play his home jukebox and sing along. He enjoyed visiting the local establishments and socializing. He maintained a close group of friends, yet was a friend to all who knew him. However, what he enjoyed the most was making and seeing others happy. Especially his wife, his daughters, and his grandchildren.

Doug was easy-going, kind, and big-hearted. He cried in happiness, but not in pain. He was soft and gentle, yet hard as steel. He never turned his back on anyone in need. One of his best qualities was his sense of humor. He was always ready with a joke, even laughing at his own. You just could not help but laugh along with him, even when the joke was not in the least bit funny, known to others as “Doug Jokes”. He had an amazing smile that even showed through his eyes, and a laugh that will always remain unforgettable.

In addition to his parents, Doug was preceded in death by his wife, his country bumpkin, Barb; his brother, Everett Mathison and wife, Myrtle; his sister, Shirley Schuelke; and his brother-in-law, Vern Ganzer. Also leaving this world too soon, his granddaughter, Alexis Rose Mathison-Szozda, and his grandson, Samuel T. Goudy.

Family and friends may call at Greenlawn Memorial Park, 1451 Green Valley Road, Neenah, on Tuesday, May 30, 2017, from 9 a.m. until time of service at 11:00 am, with Pastor Mark Klaisner officiating. Military Honors will immediately follow the service. There will be a social gathering after the services, in Doug’s honor, at Short Branch Saloon, 1102 Harrison Street, Neenah. A light lunch will be provided.

Dad – We have always loved you and we will forever be grateful that you were our dad. We love you. ~ Amy (Oddie) and Terri

Dad - Thank you for guiding me, for protecting me, for believing in me, and most of all, for loving me. You will always be my daddy and I will always be your baby girl. I am so proud of you and I love you. Please give mom a kiss from me. ~ Heather

Grandpa – Thank you for always trying, I’m sorry, and I love you. ~ Riley
To order memorial trees or send flowers to the family in memory of Douglas "Sonny Boy" Mathison, please visit our flower store.