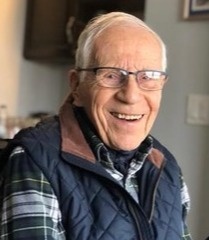 “Ace”, “Fritz”, “Doc”, “Bert”, “Gil” (by whatever name you knew him) joined Barbie, his wife of seventy-one years, in eternal life on April 14, 2022, seven weeks after her death.  He was born October 28, 1929 on Third Street in Milwaukee to Dr. Gilbert Mueller Sr. and his wife Jeannette.  He attended high school at Culver Military Academy in Indiana and rode as a member of the Black Horse Troop.  Ace graduated from Dartmouth College where he studied pre-med, played football, and met Barbie who attended nearby Colby Sawyer College. He completed medical school at the University of Michigan, his surgical residency at Minneapolis General Hospital, then served as a general surgeon at Castle Air Force Base in California. He finished his vascular surgical training in Minneapolis before arriving in Appleton with his young family in 1962.

He began his medical practice in a small office in the Zuelke Building with his wife Barbie as his secretary and later moved his practice to Doctor’s Park.  He donated three months of his time in 1968 traveling to Ceylon (Sri Lanka), serving on the hospital ship the SS Hope, treating patients and mentoring physicians.  Then, in 1970 he and Dr. William Chandler, who had worked side by side for the previous two years, co-founded Fox Valley Surgical Associates. He, along with several others were instrumental in initiating a cardiac care program for the Fox Valley.  In 1990, after twenty plus years of guiding a diverse team of highly skilled surgeons, he retired from Fox Valley Surgical Associates, which by then had become an integral part of the valley’s healthcare community.  He was known for his vision as a leader, talents as a surgeon and the kind, compassionate care of his patients.  For the next fourteen years he crisscrossed the country selecting sites for BioLife Plasma Services.

He was a down to earth man of many talents and passions including farming, cattle ranching, painting, writing poetry, and silver smithing. He and Barbie spent most of their retired life splitting time between Big Cedar Lake, Wisconsin and Oro Valley, Arizona. Their kids and grandchildren often visited, creating cherished memories of raucous card games, competitive corn hole, and his precision cooked burgers on the grill.

In lieu of flowers, the Cedar Lake Conservation Foundation, Inc. would welcome donations. CLCF, PO Box 347, West Bend, WI 53095.
There will be a Celebration of Life for Barbie and Ace on Monday, May 2nd, 2022 at 1:30 pm at the First United Methodist Church, 325 East Franklin Street, Appleton, WI. Please join the family after the service at the Appleton Yacht Club to share stories and memories. AYC, 1200 Lutz Drive, Appleton, WI.

To order memorial trees or send flowers to the family in memory of Dr. Gilbert Frederick Mueller Jr., please visit our flower store.

Celebration of Life for Dr. Gilbert and Barbie Mueller