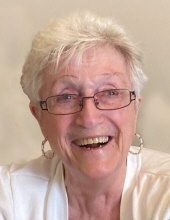 Elaine M. “Amy” Geiger, age 91 of Appleton, passed away at Peabody Manor on January 3, 2021, after a short illness. Amy was born October 11, 1929 in Appleton, Wisconsin to the late Rose and Bill Ellenbecker. She was one of the four girls and one boy born to Rose and Bill.

Amy held several positions over the years including: Dental Laboratory of Appleton, where she worked her way up to partner. Later she became a lab technician at Consolidated Papers, and then held the position of parking attendant for the Appleton Airport, from where she retired at the age of 80. Amy also volunteered for many years at St. Vincent de Paul of Appleton.

On her birthday in 1952, Amy married the love of her life, Eugene “Gene” Geiger and they had 4 children, Darryl (Bhar) Beckman, Eugene Jr. (Chip), Jodie, and Fraula. Amy cared for her family with love and care. She and Gene shared a good happy life together, often wintering in their beloved state of Texas, until Gene passed away in 1997.

Amy cultivated many friends throughout her years. She enjoyed her life to the fullest. She had a passion for the casino, a lively game of Sheepshead or Poker and not to mention a good Manhattan. She believed in keeping her mind and her body active and every week joined her friends at John Fischer Manor where she resided, as well as those in Sherwood, Black Creek or Dutch Harbor Estates to play cards. She enjoyed picking up her sister, Joan and driving out to meet their other sister, Marilyn, spending quality time at the casino and enjoying a good meal after.

Amy will be dearly missed by her son: Chip (Cheryl); daughters: Jodie (Tom) Scherer and Fraula (Scott) Nachtwey; a grandson Dylan; granddaughters Laura and Amy; and great-granddaughters Layla and Lilly. She will also be missed by her surviving sisters Joan Schneider and Marilyn Schaefer, as well as numerous nieces, nephews and other relatives.
Amy was preceded in death by her parents, Rose and Bill, her beloved Gene, her son Darryl (Bhar) Beckman, her grandson Michael Scherer, her sister Doris Van Dyke, and her brother Ed Ellenbecker.

A few months ago, Amy held a gathering for her immediate family and close friends which she considered her wake. She will be laid to rest at Highland Memorial Park January 25 in a private ceremony.

Due to Covid, a Celebration of Life will be held at a later date.

The Family would like to extend deep and heartfelt gratitude to the nurses and staff at Peabody Manor who cared for her during her last days with such kindness and compassion.

Rather than sending flowers, please consider a donation to Saving Paws Animal Rescue, located at N3141 Meade Street in Appleton. 930-830-2392
To order memorial trees or send flowers to the family in memory of Elaine "Amy" Geiger, please visit our flower store.