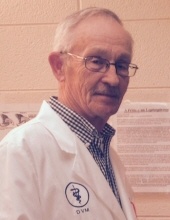 FOREST JUNCTION, Wis. Frederick “Doc” Lord, DVM, age 78, lost his courageous battle with cancer on Thursday, June 24th 2021, surrounded by his wife and children. He was preceded in death by his parents, his brother, Jim, his mother and father in law, Doris and Carl Tyler, and his precious Granddaughter, Marissa Paige Fenn.

Doc was born on August 19th, 1942 in Bondurant, Iowa to George and Althea Lord. The third of four children, Doc was a known animal lover at a young age. He graduated from Bondurant-Farrer High School in 1960, and continued his education at Iowa State University where he received the degree of Doctor of Veterinary Medicine in 1967. Upon graduation, Doc moved to Edgerton, Wis. where he practiced large and small animal medicine. In 1972, Doc met the love of his life, Barbara, when she interned as a veterinary technician at his clinic. They were married in April of 1979, eventually becoming the proud parents of three children.

In 1986, Doc and his family moved from New London to Forest Junction, Wis. Doc worked in the private sector on both large and small animals until 2003 when he saw a need and had a passion for helping animals in distress, and decided to move to the public sector. He spent over 10 years as a Humane Society veterinarian, a humane officer, and oftentimes an expert witness in animal abuse cases. In 2014, Doc took his passion a step further and started an affordable care low cost vaccination and spay and neuter clinic for companion pet owners. Doc practiced veterinary medicine until April of 2021, when he was forced into retirement due to the rare and aggressive T-Cell peripheral lymphoma that would take his life almost exactly two months later.

Together, Doc, Barbara, and their family were purebred dog enthusiasts. They owned, bred and showed Borzoi and Whippets from 1979 to their most recent Borzoi litter born in January of 2021. The Warwind Farm, Reg’d. kennel name can be found in the pedigrees of prominent Borzoi, past and present, within the United States as well Europe.

The quiet kindness, friendship and love that Doc gave his family and friends made him someone you knew you were blessed to have in your life.

The Lord family wishes to thank the members of the Calumet County Home Care and Hospice for the excellent care and support they provided Doc. Special thanks to Nurse Anna, and Hospice Chaplin, Barbara. The Lord’s also wish to express their gratitude to Emily, an amazing young woman from Synergy Home Care. Emily was Doc’s special Angel! She provided Doc with great care, friendship, and both he and Barbara spiritual encouragement.

In remembrance of Doc’s life, the family asks that any charitable donations be made to the Rhombencephalosynapsis Research Program at https://depts.washington.edu/joubert/contact.php or The Leukemia & Lymphoma Society (https://www.lls.org/ways-to-give 3 International Drive, Suite 200 Rye Brook, NY 10573)

Honoring his wishes, the family will be hosting a Celebration of Life in Doc’s memory this coming Fall.
To order memorial trees or send flowers to the family in memory of Frederick "Doc" Lord, DVM, please visit our flower store.