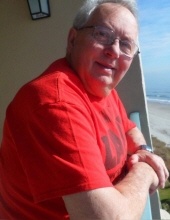 George Michael Jaraczewski (Buzzard), age 75 of Omro, Wisconsin passed away in Ascension Medical Center Oshkosh on November 21, 2020. George was born in Milwaukee, Wisconsin on August 16, 1945 to Jeanette and George Jaraczewski, both preceded him in death. On November 27, 1998 he married his wife of 21 years, Juanita (Nita) Jaraczewski.

George served proudly in the United States Army during the Vietnam Era as a gunner on medic helicopters helping rescue many of our fallen heroes. His work career included many years of over the road trucking, retiring from the Teamsters in 1998. He enjoyed gold mining his own claim in Colorado, skiing the black hills in Innsbruck, Austria. George and his wife also enjoyed snowbirding in Myrtle Beach, South Carolina where he would watch western movies while enjoying a cold beer. During the summer, George loved camping, smoking a cuban cigar and working on projects around the house. More importantly he loved spending time with family and friends, especially his spoiled dog Texas Pete (Tex).