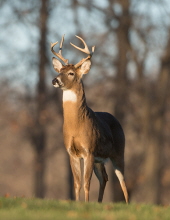 Gerald W. Krueger passed away on January 21st, 2022. Jerry was born in Milwaukee on September 30th, 1936. Jerry loved his "farm" and the deer that roamed his forest. Deer camp with the guys, the Green Bay Packers and barstool debates were his favorite pastimes. The last several years he was forced to abandon his love of the outdoors and moved to Prairie Home in Menasha.

Jerry was preceded in death by his mother Marge Bartel, his sister Nancy Schultz, brother in law Larry Francis and nephew Keith Zurkowski.

He is survived by his sister Margie Francis, brothers Ronald & Florian Wiza and sister Marcie (Bob) Zurkowski. He is also survived by numerous nieces and nephews.

Jerry's family would like to thank the residents and caring staff at Prairie Homes, who over the last several years cared for, entertained and provided emotional support to Jerry, he felt your love and compassion.
To order memorial trees or send flowers to the family in memory of Gerald "Jerry" W. Krueger, please visit our flower store.