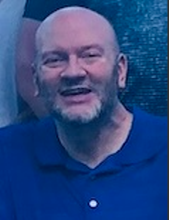 Greg Wahl, former Evansville resident, passed away at Appleton Medical Center on January
20th, 2022 at the age of 51 after a long and hard fought battle with heart disease and cancer.
Greg was born to Carol Wahl Paulson and James Wahl on April 7th, 1970. Greg graduated from
Evansville High School in 1988 where he excelled in music; playing a great trumpet and acting
in musicals. His most memorable character was playing Daddy Warbucks in “Annie.”
Throughout his years in Evansville, Greg enjoyed participating in activities, but his favorite was
swimming and he was always on the summer swim team where he earned many medals.
After high school, Greg graduated from University of Wisconsin-Madison and later from Madison
Technical College.
Greg loves family and enjoyed gathering together with all of us when he was feeling good.
Greg’s father, James Wahl, passed away when Greg was 14, and when he was 16, he gained a
new father, John Paulson, whom Greg grew to love unconditionally. Along with a new father,
Greg also gained two more sisters, Wendy and Holly, and a brother, Mark. John adopted Greg
shortly thereafter.
Greg met Rob Carlson a few years after college. He and Rob were married on the Capitol
grounds in 2012. They lived in Madison for some time and then moved to Appleton to be closer
to family.
Greg is preceded in death by his father, James Allen Wahl and his maternal grandparents, Orlin
Holm and Marian (Long) Holm.
Greg is survived by his husband, Rob Carlson; mother, Carol (Wahl) Paulson; father, John
Paulson; sisters, Lisa (Wahl) Larson,Sharon (Ziegler) Paulson, Wendy (Pauson) Entwistle, and
Holly Paulson; brothers, Mark Paulson, Craig Larson, and Kevin Entwistle; nieces and nephews,
Nolan Kiesacker and McKenzie (Larson) Kiesacker, Connor Larson and Kimberly (Bestul)
Larson, and one Great-niece, Rylee Grace Kiesacker (whom Greg adored). He also had many
adoring aunts and uncles including Jan Fitzsimmons-Magee and Max Magee of Lake
Barrington, IL and numerous cousins and friends.
Greg’s family would like to thank the Appleton Medical Center and the ICU doctors, nurses, and
therapists who took such good care of him. A private family prayer service is planned for the
immediate family with a Celebration of Life to be held near Greg’s birthday in April. Details will
follow later.
Rest in Peace dear Greg, you fought the brave fight and never gave up. You are missed and
forever loved.
To order memorial trees or send flowers to the family in memory of Gregory James Wahl, please visit our flower store.