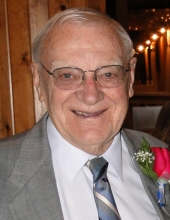 Harland Henry Meyer passed away peacefully on January 17, 2020 at his apartment in the Primrose Memory Care facility in Appleton, WI.


He was born on May 30, 1930 in Alma Center, WI to Herman and Augusta (nee Schroeder) Meyer, the first of two sons. He graduated from Alma Center High School in 1948. He married Juanita Polege on August 19, 1950, and they became inseparable for the next 68 years until her death in 2018. Together, Harland and Juanita had three children: Robert, Betty, and Sue.


Harland became a Hydro Plant Operator in 1962 at the Cedar Falls Dam, which led him to move his family from Alma Center to the Menomonie area where he lived for the next 43 years. He switched professions later in life and became a safety inspector for Integrity Mutual and later CNA Insurance companies, eventually retiring from that profession in 1992.


He enjoyed playing trumpet in a polka band early in his life, and after retirement traveling to various destinations with Juanita, but by far his favorite life-long activities were hunting and fishing.


He was preceded in death by his parents, his brother Duane, and his wife Juanita. He is survived by his children Robert (Cindy), Betty (Don) Hallgren, and Sue (Todd) Volkman, four grandchildren, six great-grandchildren, a sister-in-law Theodora Johnson, and many nieces and nephews.


A funeral service will be held on January 25 at 11:00am in the Hopee Hall at the Rassbach Museum, 1820 Wakanda St. NW in Wakanda Park, Menomonie, WI. A celebration of life for both Harland and Juanita will be held afterwards until 3:00pm.


Harland had a strong faith and we are comforted by the knowledge that he is now in Heaven with his Savior.


A special thank you to Stacy Arendt, Breeze Skorupski, Krista McDuffee and all the loving, caring and compassionate staff, residents, and resident family members at Primrose Memory Care center of Appleton. They took Harland into their hearts and welcomed him to his "home away from home" for the last year. Also thank you to Compassus hospice services and Home Instead staff who provided tremendous support and care during Harland's last week.
To order memorial trees or send flowers to the family in memory of Harland Henry Meyer, please visit our flower store.

Celebration of Life until 3:00 PM