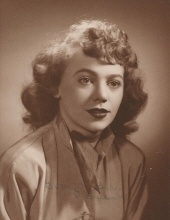 She is now with her Lord, Jesus Christ, and is reunited with family and friends who led the way. Based on the authority of God’s word, we can be assured she is now in heaven where there are no more tears and no more pain; where those who put their trust in the Lord will have joy and peace forever, together.

There will be a gathering of family and friends on Saturday, December 4th to celebrate Harriet’s inspiring life of fearless resolve and love. This celebration will be held at Valley Baptist Church in Appleton (valleyconnex.org) with a 2pm service and food & fellowship will follow. A time to share your memories of our dear Harriet will be available. She will be greatly missed and fondly remembered by all who knew her here.

Beginnings
Harriet was born on June 3rd, 1932, a turbulent time in history where the Great Depression had a grip on this country. By necessity it was also a time of resolve and creativity of our people. Harriet was inspired by the likes of Amelia Earhart, who was awarded the Distinguished Flying Cross for flying her airplane in 1932 from Newfoundland to Northern Ireland in under fifteen hours. Also of note were dedicated individuals who worked to advance areas in medicine, such as the new research on Sulfonamide antibiotics; and industry, such as the invention of the Polaroid camera.

Harriet was born into the family of Steve and Stella Wisniewski both originating from Poland. She was one of nine children and felt a deep sense of responsibility toward her family. She had the resolve and positive demeanor to help her family in those challenging times of scarcity. When she asked her mom how she could love and care for so many children, her mother assured her that God always provides, and indeed He did. Her mother’s faith in God had an impact in those early years.

She shared fond memories of caring for her younger sisters. She also recounted adventurous play and pranks with her brothers. She enjoyed reading and listening to the radio with her family, favorites like The Shadow, Lights Out, and Hermits Cave radio dramas. Around the time of World War II she would sneak out of the house as a young girl to watch welding in the shipyards and throughout her life looked for opportunities to explore old barns and spooky vacant houses. She loved to dance and would spend time at the local dance hall to dance with the military men who were brought in to Great Lakes. She had a creative, adventurous, and giving heart.

Her adventurous spirit led to the opportunity to become an au pair for Margret and Joseph Deavor, who were young professionals that worked for the university and had strong ties within the Catholic church. She was welcomed as part of their family and traveled with them around the country, including her first airplane ride in Colorado which she enjoyed greatly. Her dedication to her own family brought her back home as she felt she was needed to help with her beloved brother Bobby who was very ill with a heart complication. She was always willing to step forward in troubled times to ease the suffering of others.

Married Life and Work
Harriet met Thomas J. Owens at the Pantry Lunch Restaurant in Milwaukee where Harriet was working for a relative. It was retold many times how Tom was so overcome with her beauty that he asked for a slice of coffee and a cup of pie! They were married in 1950 before Tom was deployed in the military during the Korean conflict.

They had four children: Pamela, Drew Bird, Robert (married to Sandy Williams), and Maureen (married to Mike Gill). Harriet and Tom were dedicated parents and raised their children to be independent thinkers, good citizens, and encouraged them to follow their dreams in all life decisions. The wisdom, life examples, and support that Harriet and Tom imparted to their children promoted individual success, each in their own way.

Their wisdom and love was also imparted to their three grandchildren: Allie, Adam, and Hannah (Robert and Sandy’s children). Harriet had incredible joy spending time with each of her grandchildren hanging out together during family celebrations (Independence Day being a favorite), cooking, playing games, watching Packers, listening to her grandchildren play instruments or viewing their events, and adventuring together: including rafting, skiing, ziplining, and vacationing (e.g. Paris and London, Colorado mountains, and KU football games). She loved her family unconditionally, with great affection and lots of play! She always saw the positive in each child and grandchild.

Tom worked 3 jobs to help raise the family and later Harriet went to work in a variety of positions, which included artistic painter, telephone patch operator, Loreal hair model, US Postal Service processor, Milwaukee Public School social worker, securities & bonds manager, and eventually retired working for the federal court of hearings and appeals in downtown Milwaukee, which took her to various parts of the state for work adventures within the court and prison system. It took a lot of courage and professionalism to work in these conditions and she excelled, receiving awards for her service and being asked to train others.


Retirement and new start
After the death of Tom in 2005, Harriet moved to the Fox Valley to live near Maureen and Mike (and most importantly their beloved yellow lab, Buck). More adventures were to be had by Harriet. She loved flying, boating, gardening, entertaining guests, cooking cheesecakes and special treats, painting pictures with Bob Ross, attending musicals in the park and PAC, eating at restaurants, having Kohler spa treatments, traveling, sewing and more.

Eventually, Harriet, Maureen and Mike joined into one household on a farmette in Black Creek. More adventures followed included country walks, raising goats, turkeys and chickens, making fresh yogurt, more gardening, more cooking and more great neighbors. She especially liked starting her day reading the Bible, singing hymns and stretching with Maureen in the morning – their special time together. They all took care of each other and grew in their love of the Lord and each other.

Life well lived
Harriet’s never ending strength and love forged a long and happy life of 89 years, though she would attribute that to her carefully crafted doughnut diet! She loved doughnuts! The impression she gave people was one of care, support and fun. Her bright spirit, humor and beauty ignited the best in many who had contact with her.

Her love of baking was a strong gift, as her cheese cakes were sought after throughout the community. Her cookies at Christmas were especially a delight to receive in the mail or at gatherings. Oh for the time to speak of her lasagna, potato salad, spaghetti, Russian fluff, chicken lemonaise and spatzels, homemade breads and pies, and spam buns, a family favorite!


She was a force of nature, her influential smile, positivity, and ability to brighten a room was undeniable. She had an ability to overcome obstacles with dignity and grace. No matter what Harriet had to face she trusted in God and strength to overcome it.

Her laughter was contagious, her advice kind. She will be greatly missed, never forgotten, and will continue to enhance the universe from heaven above.
To order memorial trees or send flowers to the family in memory of Harriet Irene Owens, please visit our flower store.