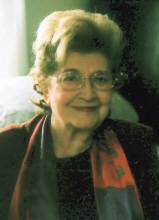 Inés Arregui Herrera Donovan (96) passed away on March 3, 2016, in Kaukauna, WI. Inés lived in Appleton since 1994, when, after the death of her husband, Dr. Anthony Donovan of Madison WI, she left Lima, Peru, to be near her children in the U.S.

On August 10, 1919, Inés was born in Santiago, Chile, to Adela Herrera de Arregui of Santiago and Francisco Arregui Berazaluce, a Basque from Guipúzcoa, Spain. Her mother having died in childbirth, Inés was brought up by an aunt; when 16, she joined her father, step-mother Gloria, and her three brothers in Lima, Peru, where her family had immigrated.

At 19, she met her future husband "Tony" who was an M.D. with the U.S. Public Health Service posted to Peru. They wed and raised four children. Tony's work with the U.S. Agency for International Development took them to live in Guatemala and Bolivia, considered "hardship posts." Major revolutions and coup d'etats, curfews, blackouts, food shortages and rationing, and government-decreed states of emergency occurred during their residencies abroad. In all these crises, Inés learned to cope, make do, and provide for her family often purchasing necessities on the black market.

One such crisis was the family's evacuation with other Americans from Cairo, Egypt, during the 1956 Suez Canal Crisis. New posts took them to Italy, Ceylon (now Sri Lanka), Pakistan, and Costa Rica until Tony's retirement from foreign service in 1964. They settled in Milford CT, their first home in the USA.

Inés was an artist who made their homes abroad beautiful living spaces for her family and for entertaining friends and foreign guests on diplomatic missions. She loved gardening and playing bridge. In 1970, Inés and Tony returned to Lima, Peru, to spend their remaining retirement years. She excelled in artistic flower arrangement winning highest honors in juried competitions. Fluent in Spanish and English, she had wide-ranging interests in literature. Once in Appleton, Inés set up a studio downtown where she made exquisite objects d'art reminiscent of Russian Easter eggs. She was a gifted and accomplished artist. In 2004, Inés became a U.S. citizen.

Inés is remembered lovingly for her sweetness, her strength of character, and her innate intelligence as well as for her loyalty, courage and dignity in adverse circumstances. She had an inner strength and sense of honor that sustained her.

Interment will be in Lima, Peru, next to her husband Tony at the Cementerio Británico.