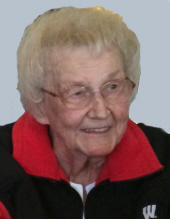 Irene Malnor, 85, died peacefully on October 12, 2016. Irene was born in Trenary, MI on June 19, 1931 to August and Jennie (Maki) Karasti. She moved to Rapid River, MI when she was in fifth grade. She was the third of the seven Karasti sisters. After graduating from High School she attended Northern Michigan University to become a teacher. She married Lawrence (Babe) Malnor on April 16, 1955. She taught for 22 years before retiring in 1986 from the Green Bay Public School District. She loved teaching and enjoyed the children and staff. In 1986 they moved to the retirement home they built on the Cloverleaf Lakes, Clintonville, WI, where they have lived for the last 30 years. She was an avid Packer fan attending games since 1964. She was a strong Finnish woman with SISU.

She liked dancing, playing games, doing cartwheels and eating homemade biscuit or pasties. She loved the holidays and gathering with family. She enjoyed watching the birds and the activity on the lake. She was a nurturing, caring mother and a loving wife, grandmother, great grandmother, sister, aunt and friend. Please say a prayer for her or sing one of her favorite hymns: Oh Jesus, I Have Promised, Just As I Am, or A Mighty Fortress is Our God. Heaven gained an incredible and wonderful woman. She loved all as much as she could.

In addition to her parents, Irene was preceded in death by her sisters, Gladys Roberts and LaVerne Brannstrom.

Heart of the Valley Crematory, Appleton, WI is handling the arrangements. A memorial gathering is planned for the summer in Rapid River, MI.