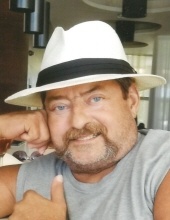 He was born March 18, 1964 to James and Shirley (Pulda) Ketchum. He served in the Army 101st Airborne from 1981 to 1983. He married Tamara Lee (Schmunck) Thiel February 23, 2012 in Chilton. He worked various jobs threw out his life from auto body, garage doors, maintenance mechanic to handy man services.

Jim enjoyed hunting, fishing, bingo, hosting family cookouts, traveling and shooting pool. He enjoyed spending time with is grandchildren and great niece and nephew. He also cherished his time with his buddies Bob and Troy.

He is proceeded in death by his father and Mother James and Shirley Ketchum, brother John Ketchum, 2 sisters Rosie Myer and Sheila Ketchum.

Family, friends and others whose lives Jim touched are invited to Michiels Bar and Grill 1100 Appleton Rd Menasha WI 54952 Saturday November 10, 2018 from 1-5 pm to reminisce, grieve, support each other and celebrate Jim’s life.
To order memorial trees or send flowers to the family in memory of James Edward Ketchum, please visit our flower store.