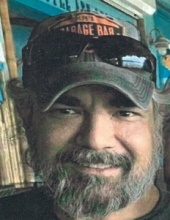 Jesse T. Ramirez passed away at ThedaCare Regional Hospital on March 6, 2022 with his family by his side.

Jesse was born on March 1, 1976, he was 46 years old. Jesse loved to do arts and crafts. He was very handy at fixing things. He worked as a custodian and maintenance man at Spring Creek in Pierre, SD for five years where he lived from 2012 until 2017. In 2017, he moved back to Omro, Wisconsin and worked for a landscaping company.

Jesse loved fishing and playing his drums. He was a very good drummer and played in various places with the band called Cuso 4. Playing them drums since he was 10 years old is what he was well known for. He used to do a drum solo that I think lasted for like five minutes he just kept going on those drums. His humor and loving personality will be missed by many.

Jesse is survived by his wife Amanda Ramirez (Davis) and his son Trenton Ramirez who proudly serves in the military in the Army Reserves. Jesse is also survived by his mother, Diane Putzer (Ramirez), step-father Steve Putzer, sister Roxanne Ramirez, Oshkosh and brother Jasen Ramirez, Madison. Jesse had many cousins, one niece and one nephew.

Jesse was preceded in death by his father Teddy G. Ramirez, grandparents Merle and Barbara Thull from Eureka. Also preceding him in death are his grandparents Esther and Vincent Ramirez, Oshkosh, WI.

Please come join us remembering Jesse. And we can talk about the good memories and all the fun we had with him. Please bring pictures, CD’s or whatever you would like to share.
To order memorial trees or send flowers to the family in memory of Jesse Teodoro Ramirez, please visit our flower store.