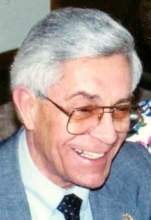 He graduated from Oshkosh High School in 1942 and Oshkosh Business College in 1947. He proudly served his country during World War II as a radio communications officer in the United States Navy aboard the USS Presley. He served in the Pacific Theater. He saw a lot of the world, most of which he would say is covered by water.

He enjoyed a long and varied career and said he never felt like he worked a day in his life. Perhaps he was at his very best running his own businesses. In 1951, he opened the Pet and Garden Center in Oshkosh. A few years later, he opened Toys and Togs in an adjacent building. After those businesses closed, he joined Metropolitan Life Insurance Company as a sales representative and later sales manager. He achieved the Chartered Life Underwriter designation in 1972. Upon retirement, the lure of owning his own business brought him to open the Timmerman Insurance Agency. After his second retirement, he continued to involve himself with part time employment at Fox Valley Greyhound Park, American Legion Cook Fuller Post and
finally at Bergstrom Automotive.

Throughout his life, Jack loved the outdoors. He was especially fond of fishing, golf and walking in the woods. An exceptionally intelligent man, he was always learning. He never read a book, unless he thought it would teach him something. Later in his life, he discovered the personal computer which came to consume a good part of each day. He would often say, "No interruptions. I am so busy." He was sharp as a tack up to his last day. Jack was a serious man, with an impish, playful side. He found people very interesting and had a gift for remembering names and faces.

In keeping with Jack's wishes, there will be no formal services. Instead, please join the family and friends for a celebration of Jack's life on Sunday, May 15, 2016, starting at 1:00 pm at Stone Toad Bar & Grill, 1109 Oneida St., Menasha, WI. No flowers, please.

The family wishes to express their gratitude to the staff of Theda Care at Home and Cherry Meadows Hospice who gave him such wonderful care during his last days.