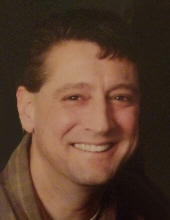 John Buchberger, age 56 of Kimberly, passed away unexpectedly on Tuesday, April 17, 2018 at St. Elizabeth Hospital in Appleton. John was born November 17, 1961 in Kaukauna, son of the late Douglas Buchberger and Theresa (Vanden Hogen) Buchberger who resides in Kaukauna. John was a graduate of Kaukauna High School and will always be remembered for his love of NASCAR, the Packers and Brewers, golf, and sports in general. In his younger years, he enjoyed playing tavern league softball, and more recently found happiness in a comfortable rocker watching movies. Above all, he treasured his sons, Jared and Alex – he thought the world of them.

The funeral liturgy for John will be held at 12:00 Noon on Monday, April 23, 2018 at St. Katharine Drexel Parish, St. Mary’s Church, located at 119 W. 7th Street in Kaukauna. Msgr. Jim Vanden Hogen will officiate, assisted by Deacon Steve Vande Hey, Pastoral Leader. Family and friends are welcome to gather at the church on Monday morning from 10:00 AM until the hour of the service.
To order memorial trees or send flowers to the family in memory of John M. Buchberger, please visit our flower store.