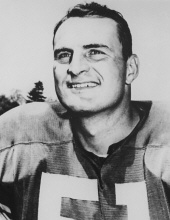 John was a talented multi-sport athlete, excelling at football and basketball, playing for U of M Wolverines football teams from 1953 to 1955.

He married Gail Lundstrom of Manistique, Michigan in 1956.

“Center John Morrow was a superb pass blocker, who could open holes up the middle for the Browns' running game and had the speed to get outside and downfield to help spring Cleveland's backs.” –Jim Cnockaert, author of Michigan: Where Have You Gone?

After football, John had a successful career in the paper industry. He enjoyed golf, sailing, skiing, and was a breeder of Rhodesian Ridgebacks.

John was a dedicated husband and loving father. He is survived by his brother Tom of Ann Arbor, Michigan, and daughter Johnna Morrow of Minneapolis, Minnesota.

John was preceded in death by his wife Gail on October 9th, 2017, brother Gordon, and sister Ann Woodell.

A memorial service for John and Gail will be announced at a later date.

In lieu of flowers, the family suggests a donation to Fox Valley Unitarian Universalist Church in John’s honor.
To order memorial trees or send flowers to the family in memory of John Morrow, please visit our flower store.