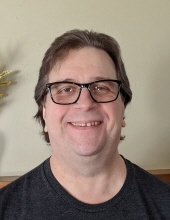 Jon Reopelle, age 52 of Appleton, passed away at home on April 26, 2021 with his family at his side, after being diagnosed with stage IV pancreatic cancer in January 2021.
Jon was born on April 10, 1969 in Shawano, Wisconsin, the youngest of 5 children to Phyllis and the late Marcel Reopelle. After graduating from Gresham High School, Jon worked on dairy farms in Germany, Hungary and Ireland and received an associate degree from NWTC. He obtained his bachelors degree in Information Technology in 2007 and his Masters degree in IT/Enterprise Software Architecture in 2013. Jon moved around to take on new challenges as a software engineer. He was employed out of NWTC at Fort Howard/Fort James in Green Bay and moved to Shorewood Wisconsin to work for Interactive Business Systems, Messaging Incorporated and Paragon Development Systems. In 2004 he moved to Appleton where he met his wife and was employed by Tek Systems, Schreiber Foods, Kimberly-Clark, WOW Logistics, Greatland Corporation and Skyline Technologies. In 2016 he and his family moved to Cedar Grove, Wisconsin where Jon worked for GeoVera Holdings in Sheboygan and Froedtert Health Systems in Milwaukee before moving back to Appleton in 2020 being employed by TotalTek of Appleton.
Jon was full of life and laughter and brought smiles to everyone’s faces. He enjoyed learning and sharing his thoughts from deep philosophical conversation to the latest Pixar film. An avid reader of everything from comic books to Rumi. A huge fan of Star Wars, Disney, formula 1 racing, British comedy shows, documentaries, role playing games and a passion for music. Jon was a lifelong fan of Wisconsin sports teams, Jon and Diane were married at Lambeau Field in 2007. Jon was truly a light for everyone he touched, and he will be deeply missed by all. We are all better for having had him as part of our lives.
Jon leaves his wife Diane Reopelle and son Boone Reopelle (12), his mother Phyllis Reopelle of Gresham, a brother Edward (Lynn) Reopelle of Sioux Falls, SD, two sisters Sandy Hohensee of Shawano and Pam (Jay) Achten of DePere, a brother Brian (Melanie) of Gresham, a mother-in-law, Dona Koepke of Shiocton, brother-in-laws Ron (Julie) Koepke of Freedom, Russell Koepke and Randy Koepke of Shiocton, and a sister-in-law Christine (Bob) Schilling of Black Creek. Others, such as nephews, nieces, cousins, great nephews and great nieces, friends, coworkers and pets will dearly miss him.
In addition to his father, Jon was preceded in death by his brother-in-law Ron Hohensee and father-in-law Melvin Koepke.
Per his wishes there will not be any visitation or funeral services, but a Celebration of Life service at Fox Valley Unitarian Universalist Fellowship, 2600 E. Philip Lane, Appleton, Wisconsin 54915 at 4 pm on Saturday, September 11, 2021. Share memories and stories by submitting your video to https://tinyurl.com/JonReopelle. Because of recent covid cases, no food or drink is allowed in the building and everyone, whether vaccinated or not, will need to wear a mask. Attendance may also be capped to 1/2 building capacity, roughly 145 people.
The service will be live-streamed. Meeting ID and passcode:
https://tinyurl.com/jonrservice
Meeting ID: 941 4599 6130
Passcode: 025323
Call-in: 312-626-6799
Memorial donations can be made to Wisconsin Public Radio or Wisconsin Public Television in Jon’s name. Jon’s family would like to extend a special thank you to Theda Care Hospice for their care.
“Follow your bliss.
If you do follow your bliss,
you put yourself on a kind of track
that has been there all the while waiting for you,
and the life you ought to be living
is the one you are living.
When you can see that,
you begin to meet people
who are in the field of your bliss,
and they open the doors to you.
I say, follow your bliss and don't be afraid,
and doors will open
where you didn't know they were going to be.
If you follow your bliss,
doors will open for you that wouldn't have opened for anyone else.”
― Joseph Campbell
To order memorial trees or send flowers to the family in memory of Jon M. Reopelle, please visit our flower store.