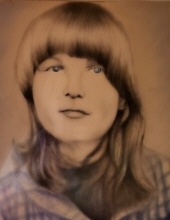 Judith Kay Vought, of Menasha, passed away, with her sister and close friend at her side, at her home in Menasha in the early morning hours of October 12, 2021 after an extended time in hospice care. Judy was born on December 11, 1952, the fourth child and second daughter of Mary Evelyn Pettingill and Ralph Merton Vought, later stepdaughter to Harold E. Johnson. As a child, she was known as a sensitive soul with a big heart for animals. She loved music and was a talented artist, often drawing the same animals she admired so much. She attended Neenah High School, known by classmates as fun, down to earth, and not afraid to get her hands dirty. As an adult, she lived for many years in Baltimore, Maryland, before returning to Wisconsin in the early 2000s, where she worked as an in-home caregiver, always making sure she could bring comfort and care where needed. She remained close to her siblings her whole life, definitely driving them crazy at times, but never losing the love that connected them. All her life, she was a dreamer, watching the night sky, drawn to its mysteries. On the night before she passed away, her last Facebook post offered an angel to guard over those she loved. Surely, many will feel that comfort from her despite her departure from this life.

She is survived by her sisters, Patti Vought of Appleton and Kathy (Todd Wittmann) Vought of Neenah, as well as four nephews and six nieces and her orange cat, Danny, whom she loved dearly and protected fiercely. She also leaves behind many friends who helped to care for her during her illness. She was preceded in death by her parents; her brothers Robert, Donald, and Thomas Vought; and her sisters Christine and Mary Sue Vought
Friends and family with gather at Sherrytown Station in Neenah (432 Sherry St, Neenah, WI 54956) from 4 to 7 on Wednesday October 20th. Have a beverage some pizza on Judy.
To order memorial trees or send flowers to the family in memory of Judith Kay Vought, please visit our flower store.