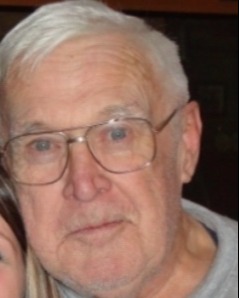 On November 14th the world we know suffered an extraordinary loss of Kenneth Owen Wiegmann at the age of 92 years old. He peacefully passed away at home with his family by his side. Ken was born to Ben and Lydia (Nitz) on June 11, 1930 in Oshkosh.

Ken was a very intelligent and a hard-working man. At the age 16 he became an apprentice butcher. In 1950, he joined the United States Navy and was stationed on the U.S.S White Marsh where he would serve as the Chief Chef until 1954. In 1953 during a brief leave, he married childhood sweetheart Madeline M. Schettle. When Ken returned home in 1954 he began working for A&P Tea Company as the head meat manager. Ken and Maddy settled in Oshkosh and started their family. Ken built many homes in the years to come for their growing family and each and every one of them were warm and welcoming, becoming a gathering place for many holidays and family events.

In 1978 Ken and Maddy opened Mike’s Home Plate family restaurant in Omro. They ran this family-owned restaurant for four years and Ken was able to display his love for cooking and serving others.

In 1982 Ken got a job with Bemis and worked as a rewind operator until his retirement in 2001.

Following his retirement, Ken spent his time outdoors, doing projects around his home, traveling, spending time with his family, cooking, and driving his Kubota tractor everywhere! He loved to give his grandchildren rides and teach them anything and everything they wanted to know.

Ken was a fantastic husband, hands-on father, a loving grandfather, loyal friend, and the absolute best cook. He was always ready with a wise crack and his audience was always holding their breath wondering how appropriate it may be. He made the bad days better. His side grin was contagious and his laugh infectious. The sound of his laughter would fill any room and whether you heard the joke, wise crack, conversation, or reason for the laughter, you could not help but go find out what it was all about. His arms were protective and his heart so kind. He was so tough, yet so tender.

A special Thank You to Compassus Hospice Care, who cared for Ken and made it possible for his wish of staying in his home to be fulfilled.

Honoring Ken’s wishes, there will not be a formal service held.

To order memorial trees or send flowers to the family in memory of Kenneth O. Wiegmann, please visit our flower store.