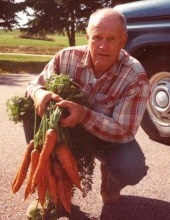 Lester was born in Merrill on June 16, 1934, in Clintonville and graduated from Clintonville High School in 1952. Additionally, he worked and retired from WE Energies. Lester was an active member of St Paul Ev. Lutheran Church in Stephensville.

Lester is survived by his brother: Butch (Kathy) Hopp of Clintonville; three sisters: Jeanette Hopp of Racine, Betty Cordrey of St. Louis, Missouri, and Edna (Bob) Frank of Neenah; brothers-in-law, Joel, Jack and Ben Larsen and Melvin Hangartner, along with many nieces, nephews, and friends.

He is preceded in death by his wife Wilma, his parents Paul and Alma, a sister Jean Hangartner, a brother Edward; a brother-in-law: John Lasso, and a sister-in-law: Joyce Hopp.

There will be a service and a committal ceremony at St Paul’s Lutheran Church in Stephensville on Friday, March 23, 2018, at 1:00 pm.
To order memorial trees or send flowers to the family in memory of Lester Hopp, please visit our flower store.