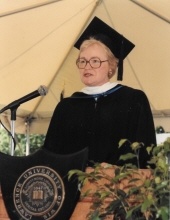 Margaret Carroll died on December 7 with her two sisters and two of her nieces at her bedside. She was 82 years old.

Margaret’s parents, Margaret Sawyer Carroll and Wallace Carroll, lived in London before she was born. When World War II broke out, her mother returned to New York, where Margaret was born on November 2, 1939. Her family was charmed by her signature light red hair.

When her mother went back to London to join her husband, Margaret stayed with her beloved grandparents, Margaret Henderson Sawyer and Wilber Augustus Sawyer, in Hastings-on-Hudson, New York. Her parents returned to the United States for the birth of her brother, John Sawyer Carroll. Her sisters Rosamond (Posie) Carroll and Patricia Carroll followed.

In her youth, Margaret lived in Maryland and North Carolina, where her father worked as a journalist. Given her father’s work, it was quite natural that she developed an interest in writing and politics.

Margaret attended Lawrence College, now Lawrence University, in Appleton, Wisconsin, majoring in political science and graduating in 1961. After she entered Lawrence she was delighted to learn that her great grandmother, Minnie Birge Sawyer, had attended Lawrence and was valedictorian of the Class of 1878. Margaret remained lifelong friends with many of the students, professors, and administrators and was forevermore dedicated to Lawrence.

After college Margaret moved to Washington, DC, where she lived for 39 years. She worked as a writer and editor for the Congressional Quarterly news service and the National Urban Coalition and in 1969 she co-founded the National Journal. In the 1970s she helped establish the Investor Responsibility Research Center and spent 23 years there before retiring as its executive director in 1996.

Margaret was an excellent cook and gardener and enjoyed entertaining friends in her beautiful house in the northwest section of Washington D.C. Despite a demanding career, she returned often to Appleton to support Lawrence in numerous capacities.

After her retirement, there was no question where she would live. Whereas many people move to a smaller house in a warmer climate when they retire, Margaret did the opposite. It was an excellent decision. She found a handsome house in Appleton, across the street from Lawrence, and once again decorated it beautifully and entertained happily, often on behalf of Lawrence.

Margaret served as a member of the Lawrence Board of Trustees beginning in 1974. She was named trustee emerita in 2006. Her tenure included leadership on virtually every board committee. Lawrence recognized her with an honorary doctorate of education degree in 2007.
Margaret loved music. She attended countless performances on the Lawrence campus and regularly traveled to New York City to attend the opera. She was active in the Appleton community, volunteering with LEAVEN for many years to help polish resumes for job seekers, helping plan the replacement of Appleton’s nearly 50-year old College Avenue Bridge, etc. She often took classes at Bjorklunden, a Lawrence campus in Door County and traveled regularly to Europe with Mary Hotson, a good friend from Lawrence. Margaret was a proud Democrat and enthusiastically supported local, state and national candidates.

Margaret is survived by her sisters Posie Carroll of Kentfield, California and Pat Carroll of Arlington, Virginia; her sister-in-law Lee Huston Carroll of Lexington, Kentucky; her nieces Kathleen (Katita) Carroll Strathmann of Chevy Chase, Maryland; Margaret (Maggie) Carroll Vaughan of Montclair, New Jersey; Caitlin Carroll Sanders of San Francisco, California; and Chloe Carroll Sanders of Los Angeles, California, and their families. She also leaves behind beloved cousins, including Michel Sawyer Yeuell of Dunnellon, Florida and Ruth Howell of Middletown, Connecticut, and their families. She was predeceased by her parents, her brother, and beloved aunts, uncles and cousins.

Her family cherishes memories of Margaret’s dry sense of humor, colorful stories, delicious stews, exceptional eye for art, and love of all things related to Lawrence, Appleton and Wisconsin.

Her family would like to extend warm thanks to the excellent caregivers at Touchmark, where Margaret lived for the last three years, and to Sara Campana of 1 Touch Organizing for her extraordinary assistance.

The family will gather at Bjorklunden in the spring or summer of 2022 to honor Margaret. Donations in her memory may be made to the Carroll Family Endowed Scholarship or the Minnie Birge Sawyer Endowed Scholarship at Lawrence University. https://www.lawrence.edu/s/giving
To order memorial trees or send flowers to the family in memory of Margaret Carroll, please visit our flower store.